Setting up and Testing LND with the Testnet Lightning Faucet

In this post we’ll be performing a walk-through of the installation of lnd, we’ll take a tour of several of its features, and we’ll also introduce the first Testnet Lightning Faucet to be compatible with lnd.

There are currently two primary methods for the initial building and setting up of lnd: manual installation directly on your host operating system, or a fully packaged instance of lnd that uses a docker container.

First, the manual build. Before we begin, ensure that you have go1.8 installed and also that your GOPATH is set properly. Finally, you’ll also need to have glide installed locally:

A node on the Lightning Network requires an up-to date view of the Bitcoin network. Currently lnd uses btcd to provide such a view in order to determine when a funding transaction has received enough confirmations, when a channel is closed, whether a open channel proof is valid, when a commitment transaction has been broadcast, etc.

Prior to standing up lnd, you’ll need an active btcd node running in testnet mode. The following commands will properly fetch, build, and start up your btcd node:

With those command executed, btcd will be properly installed on your system. Next, we’ll need to get the btcd node up and running in testnet mode (note that you should replace kek with a username and password of your choice)

Before you can use lnd you’ll need to wait for btcd to finish syncing testnet. Depending on your connection and you computer this may take several hours.

With btcd installed and syncing, the next step is to repeat a similar process to build and start lnd:

Once the above commands are executed, you should have both lnd (the daemon) and lncli (the command-line interface to the daemon) properly installed.

Finally, to start your lnd node, execute the following command (replacing “kek” with your chosen rpcuser and rpcpass for btcd selected above)

An alternative method of installing and running lnd is provided by the lnd project’s docker configuration. The docker setup provides automatic configuration for two distinct modes.

The first is a local lnd cluster connected to btcd instance running in simnet mode. The simnet is similar to Bitcoin Core’s regtest mode in that is starts with a lower difficulty allowing blocks to easily be generated by CPU’s. This configuration allows developers to spin up an arbitrary number of local lnd instances in order to test new features or debug conditions seen in the wild. Think of this configuration as a lighting-network-in-a-box.

We can easily obtain a shell to execute lncli commands directly to our running lnd node:

Or access the running logs for either btcd or lnd:

Controlling lnd from The Command Line

Now that we have lnd up and running, we’ll take a brief tour of the lncli command, the command-line interface to controlling your lnd node. lncli uses the gRPC interface to communicate directly with lnd.

The first command we’ll explore is getinfo. This command will display some basic diagnostic information such as the latest block hash and our identity public key:

The identity_pubkey field is the secp256k1 public key for your node, encoded in compressed-point format. Within the network, any channel advertisements by your node will include a signature under your public key and possibly signatures of other nodes in order to authenticate all information advertised within the network.

In order to fund the wallet within your lnd node, so you can create channels, you’ll need to generate one of the two segwit enabled addresses that lnd understands.

If the source of your funds understands lnd’s native segwit addresses (for example, bcoin) then you can generate a p2wkh (pay-to-witness-key-hash) address to send to like so:

Otherwise, you’ll need to use a nested p2sh address which are backwards compatible to existing wallets:

Once your funds have been sent, you can check your lnd wallet’s available balance (in BTC) using the walletbalance command:

The above command you shows the amount of funds you have available on-chain. In order to query for your available off-chain balance (in satoshis), the channelbalance command is provided:

The logging provided by lnd is partitioned according to a particular sub-system within the daemon. Within these sub-systems, 4 levels of logging are exposed: error, info, debug, and trace. The trace logging level is the most verbose and will log each step taken by lnd, the debug mode is less verbose but will still expose in detail the daemon’s actions.

The debuglevel command is provided in order to allow users to dynamically tune the logging verbosity of lnd. The command can either target a coarse grained logging level:

Or target a particular sub-system with a fine grained target:

At this point, you should have a fully synced btcd running in testnet mode along with an active lnd node connected to it. Now it’s time to experiment with payment channels on the Lightning Network!

In order to streamline the process of opening your first channel, we’ve created the Testnet Lightning Faucet.

The Testnet Lightning Faucet (TLF) is similar to other existing Bitcoin faucets. However, rather than sending bitcoin directly on-chain to a user of the faucet, the TLF will instead open a payment channel with the target user. The user can then either use their new link to the Lighting Network to facilitate payments, or immediately close the channel (which immediately credits them on-chain like regular faucets).

Currently, the TLF is only compatible with lnd, but in the near future as the other Lightning implementations (eclair, c-lightning, lit, and more) become available, our hope is that the faucet will also be usable with these active implementations.

The faucet can be found at faucet.lightning.community.

Before we get started, it’s worth pointing out that the TLF currently has a few contraints:

Once you visit faucet.lightning.community, you’ll see the following page: 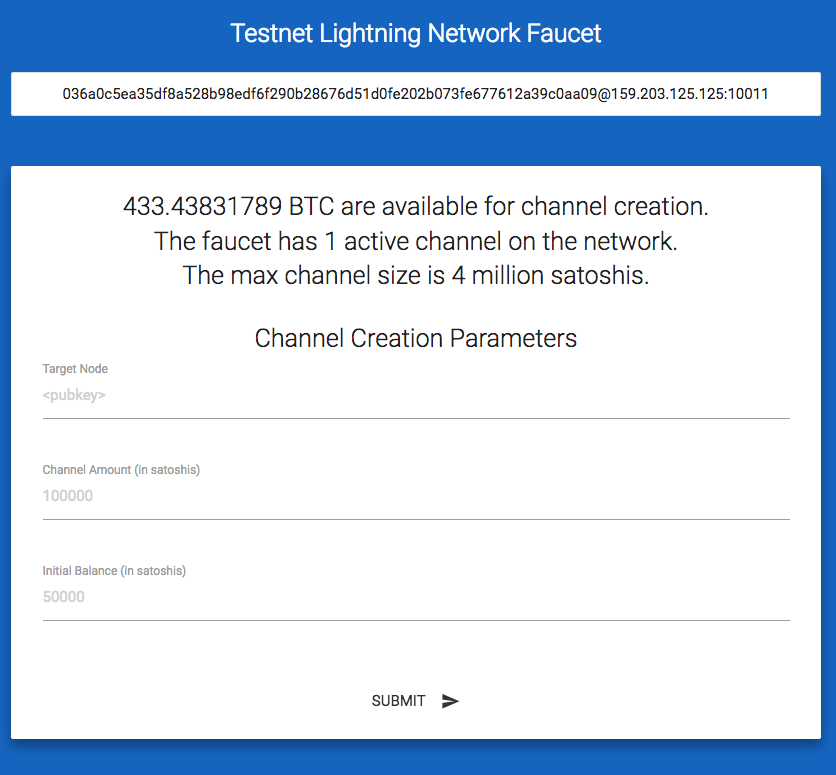 In order to obtain your channel, you’ll need to first connect out to the faucet’s lnd node:

The hex characters within that command are the faucet’s public key. The public key of a node is required to connect to a node due to the Lightning Network’s peer-to-peer cryptographic messaging scheme.

Once you connect out to the faucet’s node, it should show up under lnd’s list of active peers:

With your node connected, it’s time to finally establish your channel! In order to have the faucet create a channel with you, you’ll need to fill out the three fields in the Channel Creation form:

Once the above fields are populated: 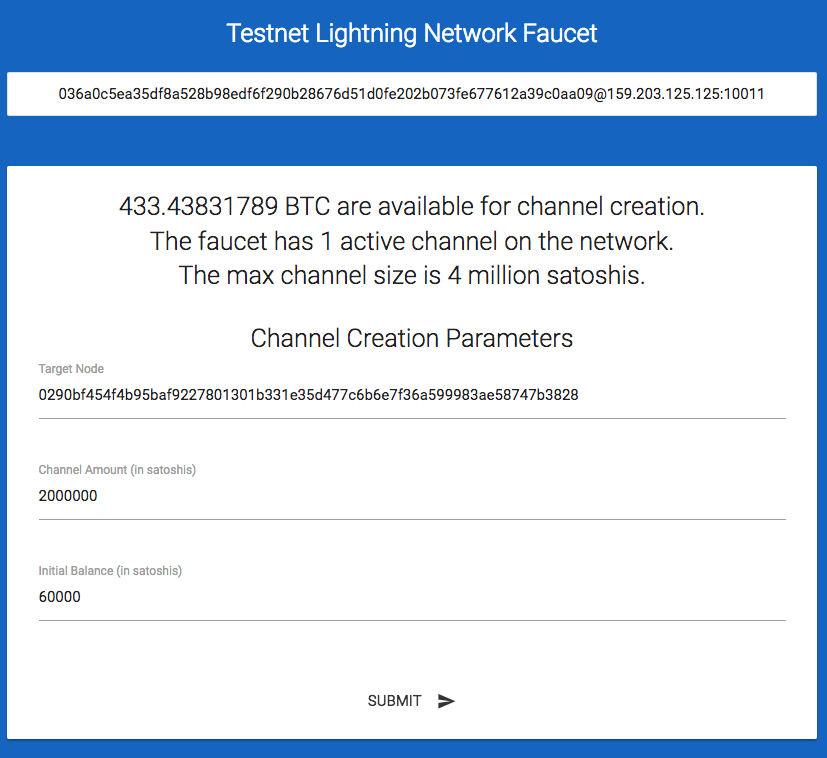 Press the SUBMIT button in order to create your channel. If successful, you should see a page like this:

Exploring the link displayed on the page, you’ll be able to see the funding transaction which will ultimately open the channel like this one here.

Using the pendingchannels command, you’ll be able to see the channel in the making:

Note in the current release, you’ll need to leave your computer active until the next block arrives. Once the funding transaction confirms, you channel will be open and you can monitor its state using the listchannels command:

Alright, so at this point you have a running lnd daemon connected to the network on testnet and you have an active payment channel open with the faucet. Now it’s time to send some multi-hop payments!

A series of commands is bundled with lncli that allow you to explore the channel graph from the PoV of your node:

As you can see from the above command at the time of writing, my local node knew of 20 other lnd nodes connected by 11 channels within the network. Amongst these channels, the total number of BTC contained within them tallies up 4.2 BTC.

The describegraph command will display your node’s view of the active channel graph (output is truncated):

The queryroute command can be used to test the existence of a route between your node and a target node:

Here we see that from my node, I have a path that crosses 3 channels and 4 nodes to my target destination. We can see that the channel I created just now (the chan_id’s match) with the faucet is the first-hop in my multi-hop route to the destination.

If I’m not running with the --debug-htlc flag on, then once I obtain a payment request from the payee, I’ll be able to send the funds over Lightning:

The result of the sendpayment command shows the path that my payment traveled along within the network to reach the final destination. If we check our channel, we can see the latest state of the channel:

If we use the decodepayreq command, then we can see the payment conditions encoded in the payment request:

This concludes our walkthrough of lnd’s current capabilities, the Testnet Lightning Faucet, and a multi-hop payment demonstration. Any questions or issues can be directed at either the #lnd channel on freenode, or within the Github issues for lnd.

The faucet demonstrated within this blog post is live on Testnet, is fully open source and can be found here. The faucet is easy to deploy as once it’s built, it generates a single statically linked binary that only requires a local lnd in order to function. The source of the faucet also includes automatic Let’s Encrypt registration in order to obtain a free TLS certificate for your personal channel faucet.

In the coming weeks, the TLF will expand into a full-blown channel explorer for lnd’s sub-network on Bitcoin’s Testnet. Once the channel explorer is finished, a similar blog post will be uploaded explaining the features and inner workings of the faucet.